May 1st everyone made the trip to Sharon Springs for the first show by a new group of owners. We found out 5 weeks before the show that the people that originally planned to put on the show wasn't going to do it. Jay and Amy along with some others decided to jump in and take over. They along with some others they called got together and through a show together and did the best they could do with such short notice.  We had a few growing pains as you can't please them all but nothing that was a problem if you ask me. I want to thank them for all their hard work to make the show a success! We didn't have a big fancy DJ so we just used a sound system Jay bought and hooked an IPod to it and did just fine! We ended up with 58 cars and felt lucky to get that many with such short notice! We had a lot of the usual cars but also had a lot on new cars to our new show and that was nice to see! I can tell you now that with a year to plan we will have a bigger and better show next year. We had a choice of awards and the choice was a metal cutout of the last show winner! Everyone chose the cutout of Jay & Amy's pickup and several were disappointed when we ran out of them. Jay went around and gathered a lot of good prizes to raffle off from gift certificates to an amazing John Deere toolbox. As one of the people that helped put on the show I want to thank everyone that came and ask them to please tell their friends to come visit us next year! Just like in the past the show will be the first weekend in May just like in the past! 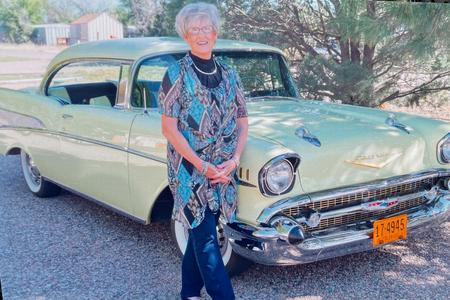 For the people that don't know this lady it's Marie Buewer from Lamar, CO. We lost her two years ago and we truly lost a wonderful lady when we did. Marie helped with the Lamar show and always had a smile. Her husband Dennis along with their daughters Shelly and Shauna give a Marie's Choice Award every year. This year Beth and I had the honor of receiving the award and I can say it is our most prized award we have ever received! It's not the same knowing we will never see her at a show again but we can look at the plaque with her picture in front of it and smile remembering all the good times! She is truly an Angel!

I went to the show in Lamar, it started With Ron and I cooking couple hundred burgers for the Chamber but I couldn't get those pictures to load. Next was the No Booze Cruise and as usual it grew from the last one. The winning hand was donated back to the Fire Dept. along with the 20/20 pot. The weather started off nice but the rain moved in like usual.

Sat. started out cloudy but the clouds gave way to the sunshine and turned out to be awesome! The final numbers turned out really good as Ron and Lonna ended up with over 100 cars and more than 30 bikes! Jerry Weber was the winner of the Ron Austin award with his 49 Chevy pickup that used to be his Grandpa's! For the people that missed it you missed a great show as there was a lot of cars that came for the first time. Mark your calendars for the third weekend in May next year so you don't miss out! Everyone was welcomed by the usual crowd of on lookers as the Lamar Show draws them out to see all the great cars! Next year will surely be bigger as most of the out of towners said they will bring their friends next year! I want to thank Ron and Lonna and everyone that worked so hard to put on a great show and we hope to see you there next year!